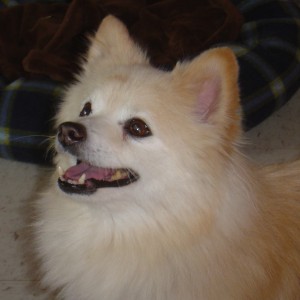 Our hearts, thoughts, and prayers are with Susanne and her family after her sweet boy Bruce succumbed to his battle with kidney disease on November 26, 2014. Bruce was 13 years old and had been valiantly battling the disease for 19 months. Susanne shared the following:

Bruce went peacefully to join his brother Cubby over the Rainbow Bridge at 11 PM. He was a wonderful therapy dog for 6 years and one of the joys of my life for 10 years. He will be greatly missed by his Mom and everyone who met him. He was my sweet prince for all 10 years of his life with me and never held a grudge against any human for the 3 years he spent in a puppy mill before being rescued by Hearts United for Animals (HUA). I will be forever grateful to them for trusting Bruce, formerly named Domingo, all those years ago. Your Mommy will miss you forever sweet Bruce!

Bruce’s original bio is listed below.

Bruce was rescued from a puppy mill at age 3 by an organization in rural Nebraska called Hearts United for Animals. Susanne adopted him in 2004 as a companion for her then 9 year old Pomeranian, who was experiencing increasing health issues and seemed more interested in life during the times Susanne dog-sat for friends’ dogs in her home. Bruce had so much to learn coming from a puppy mill, like learning to trust people and how to walk on a leash. One year later, on the anniversary of the date of his adoption, the team passed the evaluation to become a registered Pet Partners team.

During his years as a North Star Therapy Animals therapy dog, Bruce visited at the Ronald McDonald House – Twin Cities and enjoyed participating in the Reading Education Assistance Dogs (R.E.A.D.) program through the Hennepin County Library system. Susanne says he always had a wagging tail for everyone he met. One particular R.E.A.D. event stays in her memory – a mother brought her two reluctant twins, a boy and a girl around 5, into the room. The little boy was very afraid of dogs as he had been terrified by a dog who roamed his neighborhood. The boy’s mother wanted to try and provide him with a positive experience with a well-behaved dog, so Susanne sat between Bruce and the boy as he read. After reading time was over the Mom started petting Bruce, and eventually the boy did too – he even had his picture taken with Bruce that day. Susanne heard from another NSTA member that a couple years later she was doing a home visit with the same family who was now looking to adopt a dog of their own. She saw a picture of Bruce and this boy displayed with the other family photographs. Clearly meeting and interacting with Bruce had had a huge impact on this young boy.

As Bruce became older it was more difficult for him to visit, and he retired the year his much younger brother (Rocky) passed his therapy evaluation. Bruce was diagnosed with kidney failure in 2013, but his lab results have maintained good levels since that time. Susanne said, “Bruce taught me that it didn’t matter the background your dog comes from – and that they have great ability to forgive past bad treatment.” Now, in retirement, Bruce still enjoys roaming the family’s fenced backyard with his furry brothers and sisters and taking nice long naps.

Thank you, Bruce, for all the wonderful years you have given to others!