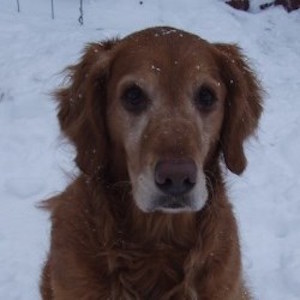 Charney never wondered if Stetson liked being a therapy dog because each time she got his volunteer bag out and put his bandana and name tag on, he’d get “So smiley, waggy and excited. He always sprinted to the car. We couldn’t get there fast enough. He really LOVED his job,” Charney said.

Together Charney & Stetson volunteered primarily at Park Nicollet Methodist Hospital. Initially they began visiting on the 4th floor then later moved into the Frauenshuh Cancer Center. Charney says Stetson really enjoyed visiting patients, getting his belly rubbed, and of course never forgot the nursing stations with stashes of dog treats. “Stetson had the special gift and would light up a room,” Charney explained. As the team would walk inside the hospital, people came from everywhere to greet him – including parking services employees, maintenance staff, patients, and others. An extra half-hour had to be planned for visits just to get in the door and past the people who loved him. Stetson also mastered the “golden lean” and would lean into some of his favorite people while visiting.

One of Charney’s favorite stories to share is from a visit to the University of St. Thomas for their first ever pet therapy visits during finals week. Over 500 students lined up to pet the group of therapy dogs! Each time a student would approach Stetson, he’d wag his tail like crazy, then flop over to make sure they’d rub his tummy. He got so much love that night, and the next day Charney noticed he was carrying his tail really low and wouldn’t wag it. She took him to the vet and was informed Stetson had sprained his tail from wagging it too much! Stetson actually loved his job so much it hurt!

During his time away from visiting as a therapy dog Stetson loved to camp, swim, hike, walk, snuggle, and play. He was always up for anything as long as he could be by Charney’s side, and was the best Velcro dog she could have ever imagined.

Stetson was diagnosed with t-cell lymphoma in July of 2012. After many weeks of chemotherapy and alternative medicine treatments Stetson achieved remission. Together they enjoyed the best gift possible – another year with Stetson without cancer. Ironically, the dog that once sat with humans during chemotherapy treatments later went through the same procedures. Unfortunately, in August of 2013 his cancer returned. Stetson fought a courageous battle and went to the Rainbow Bridge on December 12, 2013.

“There isn’t a day that goes by that I don’t think of him.”