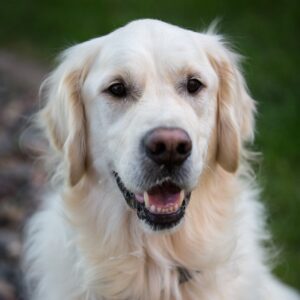 Cooper’s family says he has an “old soul” and is like a big rug. He isn’t phased by anything and loves to snuggle up to anyone, and he will lie on a person’s feet so they can’t move. Cooper is very gentle and usually waits to be invited forward when meeting a new person. Once he’s been given the okay, he sticks to that person like glue. Kathi says, “He seems a lot like Eeyore but he’s not sad; he’s just made that way.” Cooper seems especially drawn to children and turns his head to locate the sound of a child’s laugh. He’ll let kids crawl or lie on him for hours. He always seems surprised when someone walks past without petting him.

Cooper happens to have two handlers – Kathi and her daughter Grace. Grace & Cooper participate in the Reading Education Assistance Dogs (R.E.A.D.) program at local libraries and the University of Minnesota PAWS program. Kathi has been a therapy animal handler since 2007, and she and Cooper also R.E.A.D. at libraries as well as middle and elementary schools. They also visit a cancer clinic, the U of M PAWS program, and “De-stress” events at area high schools and colleges. Both handlers have also participated with Cooper at special North Star Therapy Animals events and have recently completed training to visit the MSP Airport.

Off duty, Cooper can usually be found upside down. He often sleeps upside down on the couch and lies on his back to play with squeaky toys and balls. He has also started to lie upside down on the rocks outside in the sun. He lies down to wrestle with two small dogs who also live in the house. His favorite activities are meeting new people on walks, removing the covers from his tennis balls, removing squeakers from his toys, and eating.

"Motto: You should be petting me."
X
X
X