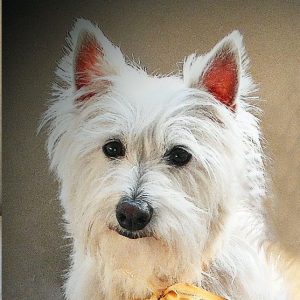 Caleigh was rescued from Friends of Animals rescue in Junction City, Kansas. She was found running stray when she was only 9 months old. She loves people and cannot get enough attention from her two legged friends. Her greatest fault is wanting to kiss everyone she meets. Caleigh is a smart dog; she loves training – the treats are an extra benefit. Caleigh was a natural at agility training; she enjoys balancing on just about anything – she thinks she’s a cat. Caleigh became a therapy animal in 2013. Her favorite therapy activity is the Hennepin County Paws to Read program. She is her happiest when laying on her blanket with kids reading to her while they rub her belly. Every week Caleigh attends school at Wag N Woofs in Eden Prairie to play with her furry friends and stimulate her mind. Caleigh’s best friend is her sister, Kenzie, who is a rescued puppy mill mama and also a therapy dog.